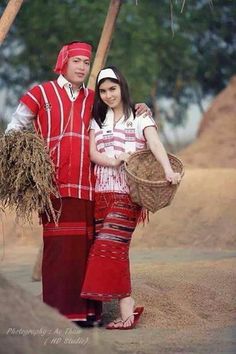 Titles:
​You will soon hear the word "Gallowah" -white person...this is what people in shops and on the street will say about you..."A white person!"
Otherwise you will most likely be referred to as a Thara or a Tharamo(male and female) respected person like pastors, teachers, educators, nurses, doctors etc.
Some of us are given family status such as mugah(aunt), padee(uncle), peepee(grandma), pupu(grandpa), momo(mom), papa(papa), demu(little sister), dey poe(little brother), jaw(big brother), naw(big sister)...

Dress:
​It is more and more common for Karen to wear western clothing, but their traditional dress is extremely important to them and they will wear it for any special occasion. In rural areas and mountain villages unmarried girls wear a white long home woven dress with fringes, but in many places they now wear woven skirts and shirts, married women often wear a black shirt with red embroidery.
The longyi's and shirts that the men wear may appear to be the same as the women's at first, but there is a difference in the pattern and how they wrap the cloth. And be sure, a man would never be found wearing a woman's "skirt!" They will find it extremely humorous if a "Gallowah" secure the longyi like the women do...

Another item that is worn by many of the Karen are "devil strings." These strings that are tied around their wrists, ankles, neck, and abdomen that they probably paid a witch doctor to put on them are believed to protect them from sickness. When children come to us we remove the devil strings with a prayer that God will place His shield of protection over the child. Parents and relatives have come to trust that the evil spirits won't injure their children when with us.

Religion:
The Karen are Buddhists, Animists or Christians. The most common belief system is a mixture of Buddhism and Animism. Eric B Hare a former missionary among the Karen (see mission and vision for more info) called them the "Devil worshippers"

Hospitality:
Many Karen homes, especially bamboo homes do not have doors. Doors  in Karen homes are almost never closed except at night or in the absence of people. People just walk in and sit down on the floor, some may call out asking if the person they have come to see is home.

When entering a Karen home, food may be offered as a sign of welcoming you into their home. If you happen to walk into their house when they are eating a meal, they will always ask you, out of courtesy, to eat with them even though you are not expected to accept the invitation. To be polite they will at first turn down the offer and then timidly accept when the invitation is repeated. At one pastors home we often visit, the wife is always preparing special food when we visit and if she is away, fruit is placed on the table for visitors with water to drink. When protesting that it is not necessary for her to go to all the trouble, she simply replies "It's the way of our people"

Manners:
Bend over when walking in front of people who are talking or in a meeting; walk behind them when possible. Don't step over things such as other people's legs, books of any kind, and other personal belongings. Moving something with your foot can be taken as disrespectful. Even when sitting, care is taken to not put books under you.  Displays of Respect
When you are walking by someone, you duck and bow your head to be lower than others in the room especially if you are walking between two people having a conversation. One should avoid walking in front of those who are seated. One should walk behind them or ask for permission first. Direct eye contact is sometimes not considered polite as it is a sign of equal status. When Paul gave Anna away to Naing Win in the marriage ceremony, Naing Win kept his eyes steadily below Paul's and avoided eye contact, this was respectful in the Karen culture.
Normally Karen walk behind those who are elders or senior to them. Folding one's arms in front of oneself when talking to another is a sign of respect unlike in American culture. This is often done during special music.
Pointing with the feet or showing the bottoms of one's feet and touching someones head is disrespectful.At first when we came and I would exchange a hug with some of the women...they would make sure their head was lower than mine-at the time I was wondering if they thought I had lice...or something. Later I came to understand that it's their way of showing respect. Although to give a hug is not part of the Karen culture, children and others who have been around Gallowah's (white people) often welcome a simple hug from the same sex. They greet each other with a nod of the head, sometimes they will give a handshake holding their right elbow with their left hand. When receiving something or giving something it is done with two hands or with the left hand on the right arm. Persons in important positions sometimes do not use two hands in greetings.

Social Interaction:
Though the Karen are a very sociable people, they tend to be very quiet and shy around foreigners and people in high leadership positions. Affection between men and women is almost never shown in public. Couples often don't even sit close to each other in worships.

Cleanliness:
Though the Karen are usually very careful to wash their hands before a meal, soap is rarely used. Karen will often eat rice with their fingers even when spoons are available.
Baths are usually taken in the evening and among some Karen are considered an essential part of every day that must happen at least before coming to evening worship. This means that clothes are usually changed in the evening and are worn (sometimes through the night) until the next afternoon. Bathing is also often done in the open. The men and boys wear shorts while they bathe, and the women and girls wear a long sarong that is tucked around their chest.