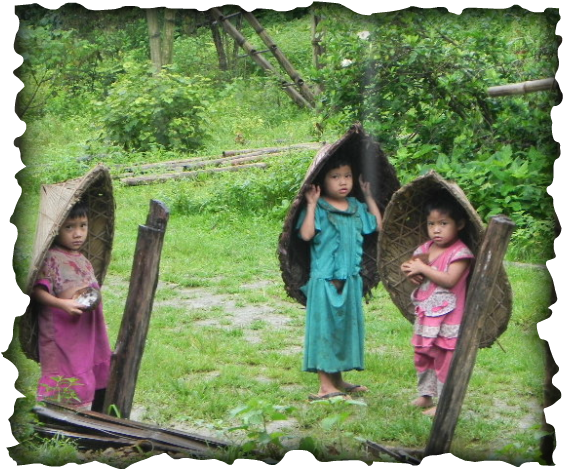 This is the story of the Karen children—each story is different, yet the same.

Along the border of Thailand and Burma, there are towering mountains rising above the Moei River, seemingly endless jungles, and small Karen villages dotted here and there. Along the river are leaf-roofed bamboo huts in small settlements—inhabited by peaceable Karen refugees. There are relatively few Thai residents in these parts of Thailand.

​This is in the province of Tak, Tha Song Yang district. In June of 2009, sounds of shelling, machine guns, and land mine explosions reverberated from mountain to mountain. Within a couple of weeks, the SPDC (Burmese Army), together with the DKBA, succeeded in causing up to 5,000 displaced villagers to seek refuge in the only safe place they knew of—Thailand.

This is the history of the Karen for the past 70 years—running for their lives; running in fear from soldiers who are instructed (not merely allowed) to rape, kill, and steal; pursued by a government who said, "In ten years you will only find a Karen in a museum."

There was a small school in Burma just across the river from Mae Salit Luang, Thailand. It provided a home and an education for about 120 boarding students. These were children who otherwise would have no hope for a brighter future. They came from varied backgrounds. Some came from caring parents who were unable to provide either food for the empty stomachs of their growing bodies, nor education for their developing brains. Others came who had been abandoned, orphaned, or rescued from an abusive situation.
They all had one thing in common—their young lives had already encountered suffering, hardship, and privation. And they all were in danger of being deceived into seeking a "brighter future" in the cement jungles of Bangkok.
The school was burned down. The Adam's family received the children as they evacuated across the river and provided a safe place for the students and their teachers in their home on Thai soil. The children loved their new home and school, with lime orchards, mango, banana, lychee, papaya, jackfruit and other fruit trees. A clear, flowing creek meanders through the property, with pools where the children love to swim. The work/study program resulted in vegetable gardens that the teachers and children are growing together. Although the structures were very primitive, measures were taken to improve the situation. But for children who are used to seeking shelter in the jungle, at best living in a leaf-roofed bamboo hut, and living with no latrines or sanitation, this was a good place.

The children were still being pursued—not by the SPDC, but by NGO and government policy-makers and soldiers under orders. They were still living in fear—fear of the unknown, fear of being sent back into a land mined war zone and fighting, fear of having no chance for an education and having to spend the rest of their youth herding buffalo, fear of foraging for food and firewood in heavily land mined jungles, fear of dying from this area's killer—hemorrhagic cerebral malaria—because of no access to medicine or hospital.

Then the Thai soldiers were planning to send these children back into Burma; we were told it might be tomorrow, maybe next week… Children from another school, who evacuated at the same time, were shipped back, several times, only to return secretly to what they knew as a place of safety and promise, only to be shipped back again and again.

The children at Lay Klo Yaw boarding school were like a big family—many of the children had lived there for it's seven years of operation; studying, playing, singing, working, and praying together. The evacuation was the fifth time this school and children had relocated due to persecution. Was it to happen again?

Does ANYONE care about the children?

A simple God fearing Thai woman, with a faith to move mountains together with her God, having a Thai Foundation, she came to the children's and school's aid. She intervened with the government and the local authorities, appealing on behalf of the children. The government officials were most gracious and kind and demonstrated much tender compassion after listening to her appeal, thus we gained the legal right to keep the children in what is now called Sunshine Orchard Children's home and Learning Center. This is the place where the children want to be, and where they feel safe.

​By the grace of God, Sunshine orchard has been operating for close to ten years-it's been through the help of generous donations from friends, family, and even strangers, that we have been able to keep going. We are so grateful to be able to keep the children in a safe, loving environment, where they can enjoy the labor of their hands in field and garden. This is a place where they are safe from child trafficking and the lure of the cities, and free to play together in the orchard and jungle without fear from enemies and land mines.

Thank you from the Adam's family and the Sunshine Orchard family, to first of all God, but also to those whom have listened to HIS voice and helped make this place a reality.